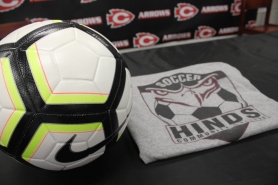 In soccer, the offense may get the attention as they fill up the stat sheet with goals and assists, but a good defense always makes itself known. For three years, Davis Turner has been a key part of Clinton’s back line, and he will continue to use his skills at the next level.

On Thursday, Jan. 11, Davis Turner signed a letter of intent with Hinds Community College to play soccer for the Eagles.

“Hinds really is the best fit for me,” Turner said. “It’s close to home and can help me accomplish the two areas I want to focus on, music and soccer. As a defender, Hinds plays defensively, and that fits my playing style.”

Named to the 2018 North All-Star Team, Turner has scored three goals this season and has one assist.

He scored two goals with two assists during his junior year. Known for serving set pieces, Turner has been a staple in the Arrows strategy.

“Davis has been a solid and consistent starter for the last three years,” Clinton Soccer head coach Tyler Wade said. “He’s a very smart defender and has the ability to immediately make an impact at Hinds next year.”

Wade added, “There is always an adjustment at the next level to speed and physicality of the game, but Davis will do what it takes and learn quickly.”

Turner is a four year member of the nationally acclaimed Attache Show Choir and is the son of Georgette Turner and Jim Turner.